and is hosting a SimRacing competition together with its partner SimRacingSystems

On the 1st of July 2018 MK-Motorsport celebrates its 40th anniversary. To celebrate this event, MK-Motorsport and SimRacingSystems are holding an online multiplayer multi-week SimRacing competition where you can win attractive prizes.

MK-Motorsport has been synonymous with the refinement of BMW automobiles for 40 years. The experience and victories accumulated from numerous racing events and competitions always flow into the development of new MK-Performance components for our customers. MK-Motorsport brings motorsports to life, from the racetrack to the road - for customers in Germany, Europe and around the world.

This competition is designed for Simracers! If you already own a copy of Assetto Corsa® or RaceRoom Racing Experience® you can enter the competition today. SimRacingSystem is a plattform to organise online mullti-week multiplayer competitions where all races are scheduled.

There will be two different competitions. The first one is going to start on May 21 on RaceRoom®. This is the "Warm-Up" competition to get you in touch with SRS. The second "40 Years Anniversary Competizione" starts on June 18th on Assetto Corsa®. At least seven races are planned per day. These races are held every day of the week and the track changes every week. But be carefull! This is a gentlemen's competition where you will get penalties for hitting other drivers!

STEP 1: Go and visit http://www.simracingsystem.com/ to learn more about the possibilities of this great sim racing plattform. Create a new user account. The account will be free of charge for the complete competition. Study the SRS forum and install the needed plugin to your system. This is very easy to do. 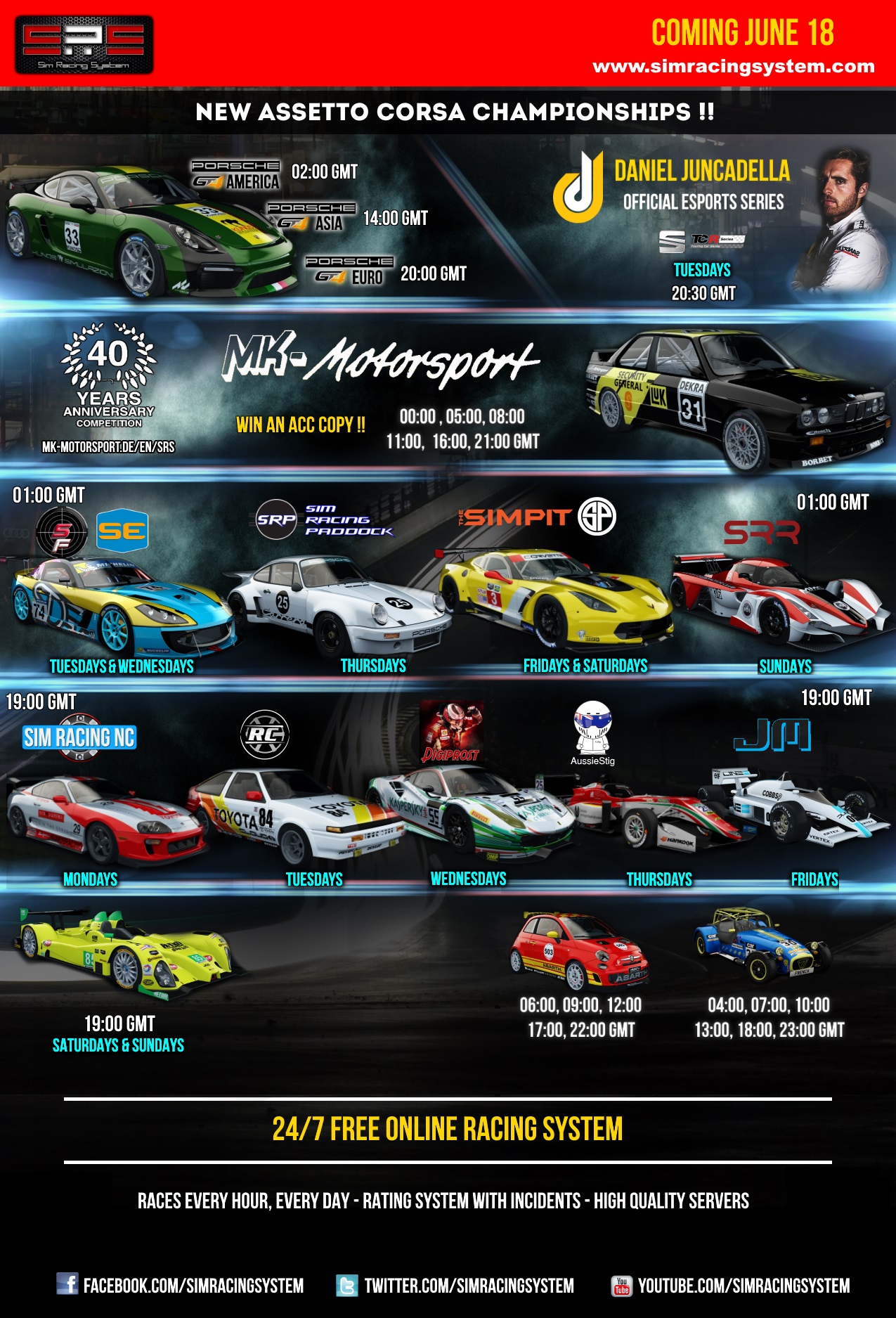 Experience the golden times of the DTM! Follow in the footsteps of DTM Champion Kurt Thiim in the "40 Years Anniversary Competizione" and drive our legendary MK-Motorsport BMW M3 E30. Kunos Simulazioni put this winning car in the right spotlight. The driving physics, the response, the sound ... with this car, Kurt Thiim was able to win the overall victory in the third round of the DTM at the Nürburgring in 1988 and could celebrate a furious comeback with his simultaneous return to the DTM!

Historical note: the Alfa Romeo 155 V6 TI in Assetto Corsa have never met the MK-E30 on the racetrack in the DTM. Nevertheless, both are playable in this event! The fun for all is our main focus. So give everything to show who the real master of the track is! ;-)

Prices: We are giving away two copies of Assetto Corsa Competizione® (Steam® PC Version). These two prizes will be raffled off on 31.07.2018 among the best 200 participants of this competition.

Important note: Kunos Simulazioni has announced the release date of this title for Summer 2018. The two winners of this competition will receive a coupon for each Assetto Corsa Competizione® Steam® Early Access Version. When Assetto Corsa Competizione® is available in the country of the winner and in Germany, the voucher can be redeemed via socialmedia@mk-motorsport.de. For this purpose the Steam® Account Login Name is required. The game can only be unlocked and played through Steam®.

Winners: Justin T. from Australia and Erik H. from Norway

We recommend every player to raise the volume to the maximum while playing online. The sound of the BMW M1 Procar is just awesome! In RaceRoom® there are lots of cars, wich relate to MK-Motorsport. Our BMW M1 attended at several long-distance trophies in the 1980s. You can chose for example the BaeuerleFarben livery from our 1000 km of Hockenheim race back in 1985. But the most legendary racecar will always be the iconic MK-Motorsport BMW MK-M1 Procar with its Kenwood livery!

Prices: Every week we're giving away one RaceRoom® "PICK YOUR TRACK" code among the top 200 participants! If you win, you can pick one of the available RaceRoom® racetracks. You will receive the activation code from us!

So how do I enter the the competition?

If you already own a copy of Assetto Corsa® or RaceRoom Racing Experience®, just visit http://www.simracingsystem.com/ and create a new user account. Study the forum and install the needed plugin to your system. Join the competition and have fun!

Do I have to choose the MK-Motorsport livery to drive at the competitions?

No. You can pick the livery or the car you like. This will also not affect your chance of winning the competition. But we would love to see our livery :-)

How can I win one of the two copies of Assetto Corsa Competizione®?

If you take part in the "40 Years Anniversary Competizione" contest on Assetto Corsa®, you will automatically take part in the raffle. After the end of the competition, two winners will be drawn from the top 200 participants and notified via SRS. The draw is on 31.07.2018.

Important note: Kunos Simulazioni has announced the release date of this title for Summer 2018. The two winners of this competition will receive a coupon for each Assetto Corsa Competizione® Steam® Early Access Version. When Assetto Corsa Competizione® is available in the country of the winner and in Germany, the voucher can be redeemed via socialmedia@mk-motorsport.de. For this purpose the Steam® Account Login Name is required. The game can only be unlocked and played through Steam®.

How can I win one of the six RaceRoom® "PICK YOUR TRACK" codes?

If you participate in the warm-up competition on RaceRoom® you will automatically be able to win one of six codes every week. For this, we draw the winner out of the current top 200. After notification of the desired racetrack, the winner will receive the activation code from us. The winner will be determined every thuesday after the change of the race track.

I have a question regarding your competition.

Just send a mail to:

Conditions of participation The participation period ends on 30 July 2018. Participation in this competition is only possible via the online internet platform SimRacingSystem.com. Using this platform may incur telephone charges and internet costs. Participants compete in a virtual racing game. The circle of the best two hundred participants of a competition over a period of six weeks qualify for the draw of the prizes and the draw of the winners. The dates for the draw of the prizes and draw the winners are July 2, 2018, July 31, 2018 and according to additional announcements. There will be a lot of prizes in the total value of € 120.- EUR. Excluded from the legitimate participation in the competition are children under the age of 14 years and employees of MK-Motorsport Krankenberg GmbH. Unclaimed winnings expire eight weeks after the earnings message. The additional purchase of products or services does not affect the outcome of the competition. Winners will be determined by lot. Winners will be notified of their winnings via the SRS platform. Prices may not be exchanged or transferred. Changes and errors excepted. The participant agrees that his name will be published in the event of winning on the website of the competition provider. A use of the subscriber data for the purpose of advertising does not take place. Assetto Corsa® and Assetto Corsa Competizione® are registered trademarks of KUNOS SIMULAZIONI S.r.l.. RaceRoom Racing Experience® is a brand of KW automotive GmbH. Steam® and the Steam® logo are trademarks and/or registered trademarks of Valve Corporation in the U.S. and/or other countries. The legal process is excluded. As of May 18, 2018.