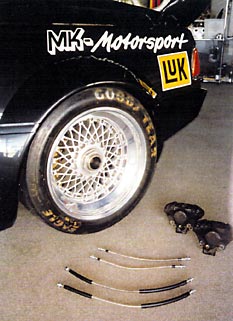 The BMW M1 are now at the tender age of 20. As we noticed during some service work on various M1s, the original brake lines become porous over time, lose their effectiveness, show bubbles and sometimes become leaky. For this reason we have developed special brake lines for this vehicle type.

MK-Motorsport BMW 318 ti turbo. No compromises: With a turbocharger, the 3 Series Compact from BMW gets so much steam that it can join the big ones in the concert - and this for almost 11,000 Marks extra for tuning.

A look under the hood of the Compact proves it: BMW has left room for a good litre more displacement and 50 hp more power. There is a gap between the cooler and the engine that inspires the imagination. The Bavarians would also have accommodated a six-cylinder. So far they have not fulfilled this wish. MK-Motorsport in Ötigheim, Baden, white remedy. MK CEO Michael Krankenberg neither replenishes engine capacity nor adds additional cylinders. Its performance data even outperform a fictitious 328i Gompact: 200 hp and 300 Newton metres of torque are the order of the day.